The April 2014 issue of Theoretical Medicine and Bioethics [1] presented eight essays regarding the use of nonhuman animals in biomedical research. While I appreciate the essays concerning contemporary research—which were well written and offered new thinking from the fields of ethics and ethology—I believe the journal, via the topics and the authors chosen, failed to communicate the most important fact regarding the current science pertinent to the use of nonhuman animals in research.

The foundational reason for using chimpanzees and other animals in research is their predictive value for human response to drugs and disease. This was alluded to by several of the authors when they discussed the necessity of using nonhuman animals. For example, Smith writes: ‘‘A common assumption in the selection of nonhuman animal subjects for research and the approval of research is that, if the risks of a procedure are too great for humans, and if there is a so-called scientific necessity, then it is permissible to use nonhuman animal subjects’’ [2]. In order for such a practice to be necessary there must be a high probability of human benefit. In the case of biomedical research, the benefit comes in the form of decreasing human suffering due to disease. This can be accomplished by discovering new treatments or targets for new treatments. It can also be accomplished by learning more about the human body in terms of pathophysiology, so that this new information can be added to older information and, when taken together, provide a more thorough picture of the process under consideration (for example, carcinogenesis, apoptosis, or amyloid plaque). 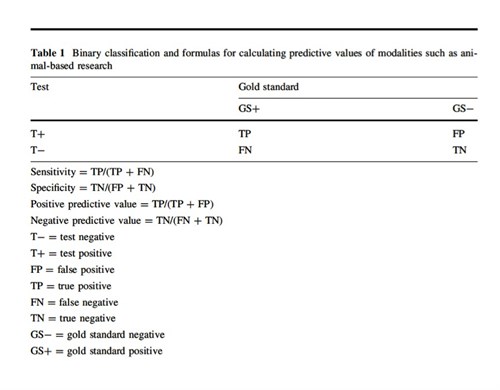 A more concise way to communicate this, and one that can be quantitatively assessed, is to say scientists need animal models that have high predictive value. Such value can be calculated using the formulas in Table 1 . Merely learning how a nonhuman animal species responds to HIV does not decrease human suffering. Adding knowledge to the world, sometimes called advancing science , does not ipso facto  lead to fewer humans suffering from disease. John Platt stated in Science : ‘‘We speak piously of taking measurements and making small studies that will ‘add another brick to the temple of science.’ Most such bricks just lie around in the brickyard’’ [3 ].

In 1996, Hugh LaFollette and Niall Shanks challenged the notion that animals were good models for human response to drugs and disease [4 ]. Shanks and I [5 –10 ] further developed the foundations concerning the problem of using one evolved complex system to model another, and I [11 –21 ] continue to publish on the topic. My position is summarized in Trans-Species Modeling Theory (TSMT), which states: ‘‘While trans-species extrapolation is possible when perturbations concern lower levels of organization or when studying morphology and function on the gross level, one evolved complex system will not be of predictive value for another when the perturbation affects higher levels of organization’’ [19 ].

TSMT rests on three legs: the theory of evolution, complexity theory, and empirical evidence regarding animal models. As all animals are examples of complex systems, they demonstrate the following properties: nonlinearity, selforganization, high dependence on initial conditions, hierarchies of organization, emergent phenomena, a whole that is greater than the sum of its parts, and outcomes to perturbations that cannot be predicted by reductionism alone. Perhaps the most important characteristic of a complex system, as it relates to animal modeling, is the fact that all complex systems are highly dependent on initial conditions. As evolution, and even sexual reproduction, changes the genetic makeup of an individual, the initial conditions vary greatly among species, and importantly, even between individual humans. Based on this, one can expect to see various outcomes to perturbations that affect higher levels of organization. Such perturbations would include drugs and disease.

Empirically, this is exactly what one sees with animal models. Once a reaction to a drug or disease is known from human data, one can usually find an animal species that reproduces the human outcome. But this is usually retrospective not prospective, and hence has little to offer in terms of predictive value. Examples of animal species reacting differently from humans include the following: approximately 1,000 drugs have demonstrated neuroprotection in animal models but none in humans [22 –30 ]. Approximately 100 vaccines have been effective against HIV in some animal model but, again, none in humans [11 , 31 –33 ]. Even important discoveries from the past have revealed differences among species. For example, the pathology from smoking was very difficult to reproduce in animals [34 –39 ], as were the results from asbestos exposure [40 –46 ].

When analyzing the oft-recited success stories of animal modeling, a closer examination reveals that the success of the model was demonstrated retrospectively [7 ]; or the breakthrough was the consequence of trying the results from tests of various species or various compounds in the same species until one was observed to be effective in humans [18 ]; or the results concerned a lower level of organization where agreement was to be suspected [15 ]. The levels of organization that science is currently studying in order to develop treatments or to discover pathophysiology are not of the lower levels.

However, the best empirical evidence that animal models offer no predictive value can be found in the pharmaceutical industry. Approximately 94 % of drugs that pass animal models for efficacy and safety go on to fail in human clinical trials precisely because of lack of efficacy or toxicity [47 ]. Previous studies support this concept [48 –55 ].

TSMT is a theory that explains the empirical evidence in the same way that the Germ Theory of Disease explained infectious diseases, and led to the demise of miasma. Scientists stopped looking for miasma after the germ theory was developed. Likewise, TSMT should be considered when deciding whether to use an animal in research or testing. The implications of TSMT are obvious: animals should be abandoned as predictive models for human response to drugs and disease. Animal models are not now nor will they ever be models with a high predictive value. Granted, not all animal-based researchers claim predictive value for their model, but most do, and almost all play the prediction card when needed [56 ]. Those concerned with the ethics of using animal models cannot continue to ignore the science that reveals animal models to lack predictive value for human response to drugs and disease. TSMT has major ethical implications for humans and animals. It explains why drug development has such a low yield as well as why such a low percentage of basic science research performed on animals translates to humans [24 , 57 –66 ]. It is concerning that TSMT was not mentioned in an entire issue dedicated to ‘‘Rethinking the Ethics of Research Involving Nonhuman Animals.’’

5. Greek, R., and N. Shanks. 2009. FAQs about the use of animals in science: A handbook for the scientifically perplexed. Lanham: University Press of America.

16. Greek, R. 2013. Animal models of cancer in light of evolutionary biology and complexity science. In The research and biology of cancer. Hong Kong: iConcept Press Ltd.

19. Greek, R., and L.A. Hansen. 2013. Questions regarding the predictive value of one evolved complex adaptive system for a second: Exemplified by the SOD1 mouse. Progress in Biophysics and Molecular Biology 113: 231–253.

22. Curry, S.H. 2003. Why have so many drugs with stellar results in laboratory stroke models failed in clinical trials? A theory based on allometric relationships. Annals of the New York Academy of Sciences 993: 69–74.

38. Northrup, E. 1957. Science looks at smoking: A new inquiry into the effects of smoking on your health. New York: Coward-McCann.

39. Utidjian, M. 1988. The interaction between epidemiology and animal studies in industrial toxicology. In Perspectives in basic and applied toxicology, ed. B. Ballantyne, 309–329. London: Butterworth-Heinemann.